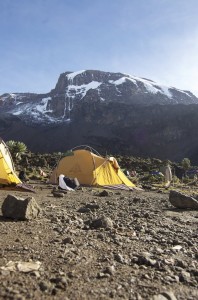 We have received a message this morning from the Kilimanjaro climbers and all are doing well! They are in the 3rd day of a 6 day ascent, so almost halfway to the top now. Everyone remains positive and hopeful of reaching the top.

Florentina Masawe has indicated she is tiring, but still determined. At 62 years old, she is the oldest climber, but this Kili climb has very special meaning to her. In addition to the symbolism of climbing as a partner with ICBD and providing African representation, Florentina was born on this mountain. She has climbed twice before… albeit younger! She grew up in the villages of Kilimanjaro, leaving when she received scholarship to Oxford. She continued her education in Sweden, where she married and had her children. Several years ago, she felt a strong call to return to her birthplace. Her husband has passed on and her children grown, so she has worked tirelessly to provide assistance in these villages.

She served as a field social worker in Sweden for 25 years, so her assistance with this water project has been absolutely invaluable. In truth, it could not have happened without her.

Her children are asking her to return to Sweden, but she is torn between family in Sweden and the roots of her lineage speaking to her through this mountain. So climbing Kilimanjaro is a personal act of love for her, believing it may be the last time she makes this ascent. I find excuses to ask her about life on her mountain, just so I can see the light in her eyes as she speaks of Kilimanjaro.

It is our hope that the mountain is loving her… and all of these climbers… as they add their personal stories to the generations of stories, lived and told and retold, about Kilimanjaro.