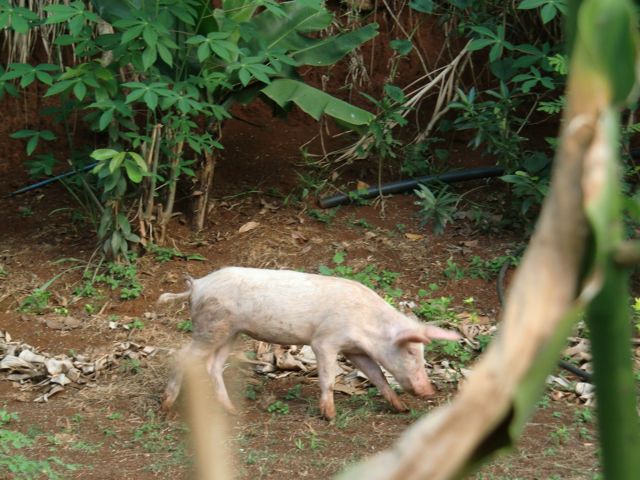 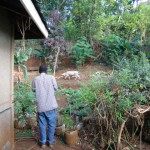 On a recent visit to Alphonse’s Kyaseni village home, we were alerted to ‘something happening’ by the insistent barking of Simba, the watch dog. Simba is Swahili for ‘lion’, and Simba was living up to his name quite nobly, barking fiercely and straining at his leash. 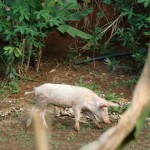 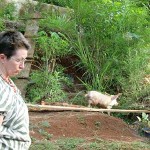 Alphonse was followed by Jean towards the pig, and I was amazed to see Jean take a position that looked like a linebacker’s stance getting ready to make a tackle. I grabbed a camera, since I was pretty certain my pig catching skills would be inadequate, and Rev. Sandy took up a safe position on the porch. 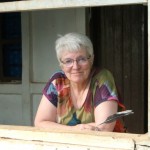 First efforts to drive the pig towards the pen were fruitless, with the pig easily maintaining a safe distance from Alphonse and Jean. More aggressive efforts to corral the pig worked up a sweat (for the people, not the pig) but no progress was made until a group of school boys came along. Seeing the problem, the young men eagerly joined in the chase. 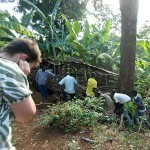 Jean covers her ears to the squealing as the pig is caught and carried.

With everyone working together, the pig was driven toward the pen but remained elusive, by running underneath the corral. Now cornered, the pig began squealing loudly and indignantly at his predicament. One young man saw his chance, went down on his belly and grabbed the pig’s hind legs. The pig was pulled into the open and the other young friends rushed in to help. 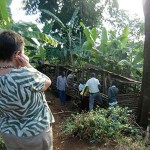 The pig was now protesting at the top of his lungs, as Jean covered her ears to the squealing and the young men struggled to carry him to his pen. Ultimately thwarted in his bolt for freedom by ‘community cooperation’, the pig gracefully accepted his situation and calmly resumed eating his dinner.