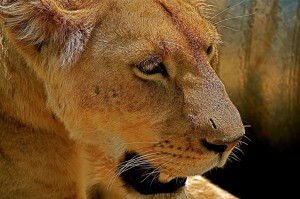 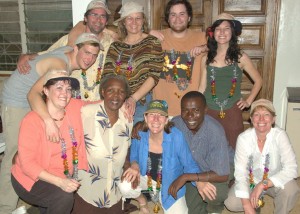 Life in Tanzania has continued to be filled with wonder. Our entire group spent two days on Safari, with an amazing number of animals seen and photographed. One land rover contained the film crew and the other had the rest of us playing tourists. It was really very funny to look up and see maybe six cameras at once pointed at each other… filming or photographing someone… as THEY filmed and photographed someone else! The good news is we have some truly beautiful pictures and film footage, for the documentary and to share when we get home.

The landscape of Ngorogoro is so dramatic and utterly unique. It was formed by first a rift… a great chasm that opened and allowed lava to pour out onto the earth’s surface. Over time, the lava itself formed a volcano. Eventually the volcano collapsed in on itself, creating a great flat plain or crater, surrounded by a mountainous wall.

As safari visitors we traveled first to the top of the crater walls, then descended over a rugged, sometimes slippery road to the plain far below. Once there, the eco system of plant and animal life living within this naturally contained environment, offered us an immediately apparent view of nature in balance. Predators and prey coexist, in largely plain view of one another.

It was thrilling to see a pride of lions resting in the grasses, with a herd of gazelles grazing peacefully in the distance. If a lion began moving, the herd went on alert, gauging whether or not the movements were a threat. It was an incredible visual odyssey of life and death… and the impossibly intricate interdependence of creatures large and small.

Once back in Moshi, we split up to accomplish dual purposes. Catherine went with Matrona, our wonderful cook here, to film life in her village home. As a single mother, Matrona struggles greatly to care for her small son and to help with her extended family. She dreams of a better future for herself and Soloman, not knowing how, but hoping for the best. Catherine was deeply touched by the material poverty she witnessed today, and was challenged to maintain composure in the presence of these hard realities.

The rest of us met with officials from the Tazanian Water department and the Pangani River Basin Project. We accomplished a lot in the obtaining of further information and support towards the required permits and surveys. We remain on track for drilling to begin this summer…with the continued support of our family, friends and caring donors.

We are all so excited and hopeful to see our plans for immediate clean water relief realized. These first 25 wells are eagerly awaited by many, many women like Matrona… who are already grateful and joyous of the time and health the wells will provide them. Water IS life… and no one knows it better than these women who walk, climb and carry it for hours and hours everyday. Today brought us ALL one step closer to the realization of our shared dreams!